What you should know about Pit Bulls…

Pit Bull is not a breed, but has become something of a catchall term for any short-haired dog with a blocky head and stocky appearance. Did you know that when genetic test results are compared with breed labels put on dogs by experts (like veterinarians and shelter workers), the labels turn out to be wrong over 85% of the time? In fact, the difference of opinion between experts all looking at the same dog is huge, not even counting the DNA.  At this point, the term pit bull, along with identification of mutts in general, (who make up 44% of the dog population) has become so confusing and meaningless that even veterinarians are questioning how useful breed identification is. Many organizations suggest we stop using breed labels all together.

But can’t you do genetic testing?

Not for ‘pit bulls’. The company who created the Wisdom Panel states, “Due to the genetic diversity of this group, we cannot build a DNA profile for the Pit-bull.”  They go on to add, “When these types of dogs are tested with Wisdom Panel, we routinely detect various quantities of the component purebred dogs including the American Staffordshire Terrier, Boston Terrier, Bull Terrier, Staffordshire Bull Terrier, Mastiff, Bullmastiff, Boxer, Bulldog, and various other Terriers.”

So, most ‘pit bulls’ you see are basically mutts of a certain body type. Here is the bottom line:

All dogs are individuals.

The first thing we know is that NO breed is uniform and no trait will be expressed by every dog within a breed, even if the dogs are similar in appearance. In fact, when two dogs from different breeds are crossed, the variations in the puppies are amazing. Seriously, look at this and tell us it doesn’t blow your mind. 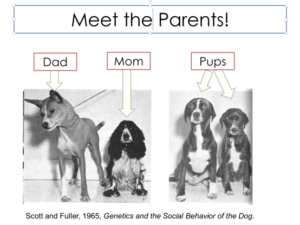 We are guessing that if the pups showed up in your local shelter, someone would slap a pittie label on them. Wouldn’t you be tempted to?

So if two dogs from known breeds are this wildly different on the outside, imagine how different they might be on the inside! And for rescue dogs…we simply will never know with certainty what kind of dogs mix we are looking at.

That study was published in 1965, so basically we know that humans have a hard time giving up their beliefs that we can believe our eyes and that our ideas about what we see are right. Not busting chops. We are human just like you and we might fall in the same trap when we see a shih tzu, or a golden retriever. We all carry stereotypes. It’s just what humans do.

So, let’s try to separate the bull from the pit, shall we?

Not all ‘pit bulls’ were bred to fight. While some American Pit Bull Terriers were bred for this purpose, due to their athleticism and strength, they also found their way into other roles, including helping on farms. They were bred to be ‘game’ which means they are determined. That determination was exploited in dog fighting circles where dogs were encouraged to be aggressive with other dogs. It is important to understand that gameness is not the same thing as aggressiveness. It is best considered a trait of a working dog. That is why they are now being used as police dogs in many cities and why they can do things like rock agility courses.

Meanwhile, American Staffordshire Terriers, which are also grouped under the general term ‘pit bull’ never was a fighting dog, and gameness was not necessarily a concern, either, as they were primarily show dogs, bred for conformation and appearance. Today’s pit bull is many generations removed from both these original breeding lines and has been mixed with so many breeds that it is impossible to make generalizations about temperament.

Not all ‘pit bulls’ hate other dogs. Not all ‘pit bulls’ love other dogs, either. Dogs should always be supervised, especially when new or high value treats and toys are around. Learning canine body language, understanding dog training basics, and being an educated owner are as important with pitties as with any other dog.

Bully breed dogs do not have a higher pain tolerance. Pain management is a relatively new area of study in veterinary medicine. Did you know that there was a time that it was thought that all dogs were relatively immune to pain? That is now changing as it is increasingly believed all animals, even robust looking ones like the bully breeds, do feel pain much as humans do, even though they express it differently.

Bully breed dogs do not have locking jaws. They do not. There is nothing physiologically different about pit bull jaws than any other canine.

No dog, including pit bulls, are aggressive to humans by nature. ‘Pit bulls’ are generally smart, friendly, affectionate and eager to learn. Most recent statistics from the  American Temperament Test Society, rank AmStaffs right up there with golden retrievers, with ABPTs ranking even higher with 87.4% of 913 American Pit Bull Terriers passing. And they all did better than collies (80.6 % of 888 collies passed).  Take that, Lassie! (We kid, Lassie, we kid). But this warmness toward humans is not surprising as human aggression was actually bred out of pit bulls, not in! Even in fighting lines, dogs that can’t be handled, or who might be aggressive toward spectators were considered bad for business and undesirable. This does not mean that dogs who are under-socialized, poorly trained, abused or neglected have never caused harm but this risk is present in ALL breeds who are mistreated.

They were never known as Nanny Dogs. We love that people want to help dogs that have had damaging myths spread about them for way too long, but the solution is not to spread good myths.  The term is a recent invention, starting to show up in the 1980’s. Never, ever, ever leave a young child unattended with ANY dog. All. Dogs. Bite. And kids are notoriously hard on pups. For an excellent video on canine bite prevention, please view this short video: Stop the 77.

Not everyone should own a pit bull. And not everyone can drive a stick. Some dogs need owners devoted to daily grooming of their dogs. Some need to be devoted to providing high levels of exercise. Because pit bull type dogs are very athletic and some, though not all, have high energy (there are definitely some couch potatoes in the mix), keeping up with training and keeping your dog engaged will be important to set your dog up for success. Training is an always thing, not a puppy thing. Canine teenagers also need guidance.

For more information on pit bulls, check out these sites: